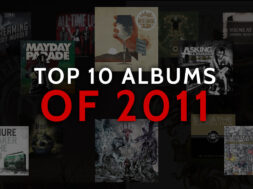 Continuing on with our ‘Top Albums Of The 10s’ series, we shift our focus into 2011.

If you’re here, chances are you were, (and still are) in your emo phase, and you know for sure that 2011 was a crazy year for music in the scene, with some of our absolute favorite bands releasing some of their most iconic work of all time. From Sleeping With Sirens, to Emmure, to The Wonder Years, here are CaliberTV’s picks for the top ten albums of 2011.

Post-hardore band Thrice’s release of their album Major/Minor in September of 2011, although not making a spot on our top ten list, it lands a spot on our honorable mentions list. The album in its entirety is very unique, and serves us with amazing grunge influences that were rare for the 2011 music scene. The song, “Yellow Belly” which kicks off the album, has an acoustic rendition that ends it, and both are phenomenal; earning it a shoutout on our honorable mentions list.

To all of our Monster Energy Warped Tour fans: this one’s for you. The Black Dahlia Murder’s June 2011 release of their full length studio album, Ritual produced their hit “Moonlight Equilibrium”, and although, many people argue that Noctorunal is more iconic, it is without a doubt that Ritual is totally badass and deserves some recognition on this list too.

Coming in at number 10 on our list, Yellowcard’s When You’re Through Thinking, Say Yes. This album is of course not the most well known release the band has ever put out, (yes we’re talking about you, Ocean Avenue) however, the entire album is just a banger after a banger. It serves us the staple pop-punk Yellowcard sound that we all loved from the start, however it wasn’t generic in the way that people tend to stereotype pop-punk with. The release was one of the strongest since Ocean Avenue, and it is one that even almost ten years later is still relevant, and one that you can enjoy no matter how much time passes, which is why we have placed When You’re Through Thinking, Say Yes on our list of the greatest albums of 2011.

This wouldn’t be a complete list without at least one Djent band, right? Well, here we are. Volumes September of 2011 release Via is one of those albums that no matter how much time passes, it will always be a go to for all of those Djent/metalcore lovers out there. With some of their biggest hits, like “Wormhole” and “Edge of the Earth” that feature influences of groove metal and stellar vocals, Volumes Via earns its spot as number nine on our list for best albums of 2011.

8. The Wonder Years – Suburbia I’ve Given You All and Now I’m Nothing

Back in June of 2011, Pop-punk band The Wonder Years released their sophomore album, Suburbia I’ve Given You All and Now I’m Nothing and it was by far the band’s greatest release to date. The album gave us some of the band’s most iconic hits, including “Local Man Ruins Everything”, “Suburbia”, and of course, “Came Out Swinging”. The songs, and overall album, have lived in the minds of every angsty suburban pop-punk kid rent free for nearly ten years now, with iconic lyrics that  you’ve definitely tweeted or said you wanted a tattoo of at least once. That definitely will earn this timeless classic a spot on our top albums of 2011 list.

Alternative punk band Rise Against released their album Endgame way back in March of 2011, and it has given us some absolute classics that we still love to this day. The album has a bit more of a pop influence than their 2008 release of Appeal to Reason, but regardless of that, the overall production and tone of the album is a solid 10/10, and with hits like “Satellite”, it of course lands a spot on our list!

6. We Came As Romans – Understanding What We’ve Grown to Be

Metalcore powerhouses We Came as Romans graced us with the release of their sophomore album, Understanding What We’ve Grown to Be in September of 2011, and we literally have never stopped listening to it since. We Came As Romans has proven time and time again that they mean business when it comes to the scene and the music they put out, and the release of this timeless album is no exception to that. Understanding What We’ve Grown to Be is as strong lyrically as it is musically, as well as showing hints of their post-hardcore influences, which lands it at number six on our top albums of 2011 list.

5. Sleeping with Sirens – Let’s Cheers to This

Alright, whether or not you’re still jamming to “If You Can’t Hang” in 2020, or you’re one of those people who love to hate Sleeping With Sirens, it is without a doubt that Let’s Cheers to This is hands down one of the most iconic albums of the 2011 scene. If this doesn’t slap you in the face with early 2011 Warped Tour and Hot Topic nostalgia, we’re really not sure what will. The album also features really sick instrumentals and of course Kellin Quinn’s unmistakable and distinctive vocals, making it one of the band’s strongest releases of all time. It’s no surprise that Let’s Cheers to This is featured on this list, and if you can’t hang…there’s the door.

Post-hardcore supergroup Destory Rebuild Until God Shows February 2011 release of their album D.R.U.G.S is an album that is pretty much promised to throw you back to the days of black and white skinny jeans, straightened fringes and those rubber band bracelets we used to wear like sleeves. This is the band’s only ever studio album to be released, but with Craig Owens absolutely amazing lead vocals, unique instrumentals, and of course hilariously iconic song titles, it is without a doubt that D.R.U.G.S was a top tier album of 2011. Like come on, how could an album that goes hard with song titles like “Laminated E.T. Animal” not be high on this list?

3. Emmure – Speaker of the Dead

Metalcore’s very own Emmure takes the number 8 spot on our list, because, well, in the simplest of terms, this album went, and after nearly nine years, still goes hard as hell. It is without a doubt that Speaker of the Dead is on every metalcore kid’s list of top albums ever, whether or not it makes you nostalgic, you’re a sucker for the killer vocals on literally every track, or you just absolutely love every aspect of it. From “Solar Flare Homicide” to “Bohemian Grove”, Emmure’s Speaker of the Dead gets placed on our top albums of 2011 list for sure.

Sacramento post-hardcore band A Lot Like Birds graced us with their absolutely flawless album Conversation Piece in 2011, and it was without question that we would give this masterpiece the credit it truly deserves. It, in our opinion, is criminally underrated, and we think it deserves as much recognition as albums like Dance Gavin Dance’s Mothership has gotten. “Vanity’s Fair” alone earns Conversation Piece a runner up spot on our top albums of 2011 list!

And of course, taking the throne for the best album of 2011: British Metalcore band Asking Alexandria’s  Reckless and Relentless, the follow up to their iconic 2009 release Stand Up and Scream, was a major surprise for fans of the “crabcore” phase of Asking Alexandria. The April 2011 release gave us a lot of frontman Danny Warsnop’s cleaner vocals, rather than the more scream filled releases we had gotten from the band in earlier releases, but the thing is, my god did it work.  With hits like “A Lesson Never Learned”, “Closure”, and so many tracks that were just hit after it,  it is no surprise at all that Reckless and Relentless takes the crown as being the best album of 2011, hands down.

tags: 2011 A Lot Like Birds Asking Alexandria Destroy Rebuild Until God Shows Emmure Rise Against Sleeping With Sirens The Wonder Years Top Albums of the 10s Volumes We Came As Romans
previous TOP 10 BRING ME THE HORIZON SONGS
next TOP ALBUMS OF THE 10S: 2012