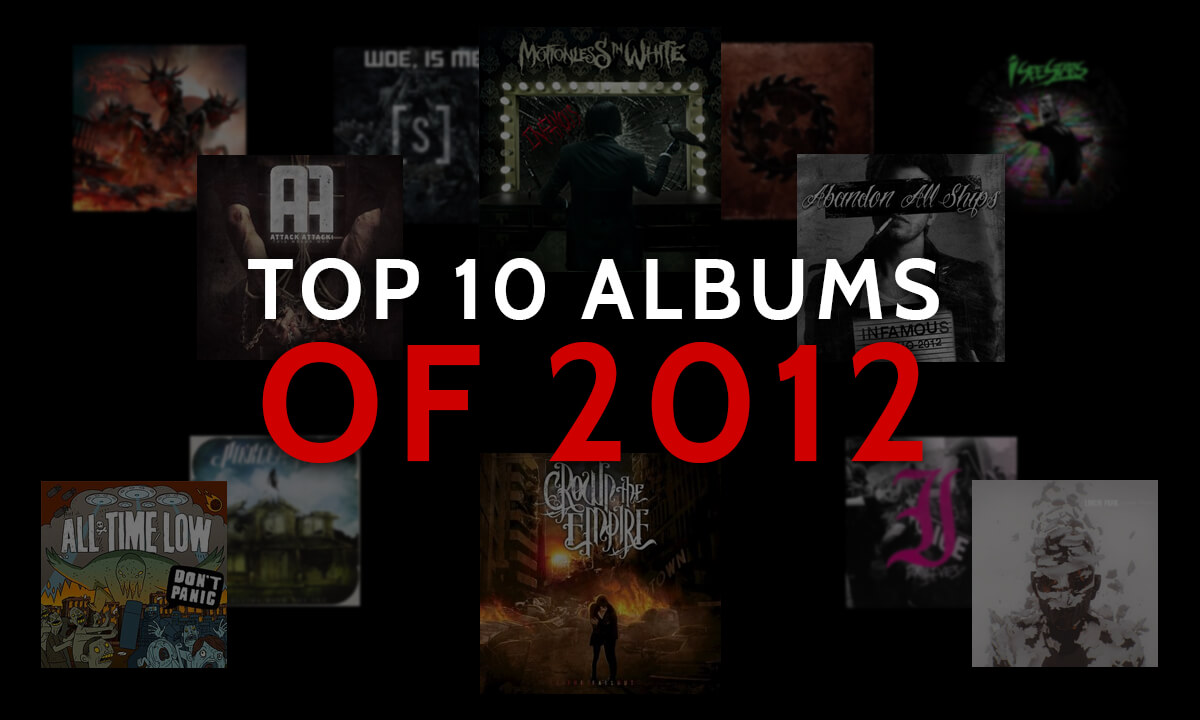 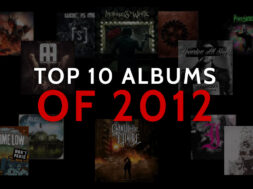 2012 — A year the Mayan calendar predicted would host the end times. Also the same year the movie based off that idea was still taken seriously and not considered a comedy.

In heavy music, it was a year of massive growth for the different sonic templates a band could implement. There was an air of urgency not only because of the possibility of the world’s end but also the continuing rise of and serious potential of the next wave of heavy bands. This, of course, brought about a wide array of incredible albums. Here are 10 we consider to be the best from 2012.

Most consistent band in metal? Highly likely. Ex Lives does little to sway listeners from the Buckley bros. & Friends usual violent soirées but it packed some of the best riffs and scream-alongs of the early 2010’s in one chaotic package. “Underwater Bimbos From Outer Space” went on to become a staple hit in the band’s insane, anything-goes live shows and “I Suck (Blood)” provided the familiar and sharp lyrical charm we have come to expect out of an ETID record. Ex Lives may not be the band’s most recognized work, but it sure is some of their best.

Despite releasing near the end of Summer, Yellowcard released THE pop-punk album for the season. Fittingly, this is the album with Always Summer on it and the sun on the album cover is just a fun coincidence. Southern Air matured Yellowcard further into the pop-punk veterans they are now viewed as and featured some particularly positive lyrical reflection from frontman Ryan Key. Late in the band’s career, they were still pumping out great albums and this is the proof.

The UK always seems to break new approaches to music and take bands skyward. Enter Shikari, in particular, had been combining electronics with metalcore since the mid-2000’s. But A Flash Flood of Colour was such a genre-bending step up that I don’t even think the UK grasped just how innovative Enter Shikari were being at the time. Utilizing drum & bass breaks in “Sssnakepit”, politically-aware aggression in “Arguing With Thermometers”, biting wit in “Gandhi Mate Gandhi”, abundant energy throughout and constant changes of pace with slower tracks like “Stalemate” and “Constellations”, A Flash Flood of Colour is interesting from front to back. And a hell of a lot of fun. Voting “Hello Tyrannosaurus, Meet Tyranicide” as the best song title ever.

In late 2012, no other band was on everyone’s lips more than a newly-signed theatrical metalcore band from Texas named Crown The Empire. We all know now this could have been Post Malone’s band, but really, what Crown The Empire did have was great timing. No one else at the time was tackling movie score metal better and the choruses in the title track, “Two’s Too Many” and” Johnny’s Revenge” were total brain drills. Being a concept album, The Fallout captured several different emotions including some notable reflection and drama in “The One You Feed”. Though essentially more of a reciting of a script than an honest outpouring, one could view frontman Andy Leo as a fantastic actor which REALLY makes this movie score metal and, in hindsight, adds to the charm.

Featuring plentiful guest talents, a new record label in Hopeless Records and a clear, consistent vision, Don’t Panic primarily showcased a more mature All Time Low. “The Reckless And The Brave” detailed the first time the band ever grappled with the idea of dropping everything in their lives for a career in music. Regardless of the weight lifted off the band’s back by making these songs, this was still the same upbeat pop-punk band the world fell for in the late 2000’s. Just with more of a story to tell.

No melodic hardcore band is as built on passion as The Ghost Inside was on Get What You Give. This record moves whoever listens to it. Whether that’s emotionally or physically depends on who you ask, but with bruising, poignant anthems like “Engine 45” and “Dark Horse”, the answer could definitely go either way. The addition of clean vocal choruses went a long way into further developing the band’s live appeal and listenability.

Sequels to the original idea can be rough. Unless you’re Terminator (or Shrek. Yes, I said it, email me about it.). Periphery flipped this concept upside down and made their career-defining album. Without James Cameron. While not as mathy and head-spinning as Periphery I, Periphery II honed in on the atmosphere and the catchiness, making for better overall songs. “Scarlet” was the band’s first real sing-along and “Have A Blast” is still the only time I can remember hearing violins and blast beats within 30 seconds of each other. This was a real guitarist’s album too, with the likes of Dream Theater’s John Petrucci, The Faceless’ Wes Hauch and, most shockingly, Asia’s Guthrie Govan all guest soloing throughout the record. There is much to praise about Periphery II, perhaps most importantly its enhanced melodic ability which made songs like “The Gods Must Be Crazy” and “Erised” so memorable and ear-worming. Spencer Sotello truly became Periphery’s voice here whether anyone likes it or not. A diverse, cohesive masterpiece.

Not only was Digital Renegade a huge album cycle for I See Stars, it coined and popularized an entirely new subgenre, EHM or Electronic Hardcore Music. Dubstep was still huge in the mainstream during this time but I See Stars took the idea a step further by implementing several electronic music styles. From a basic standpoint, the combination of breakdowns both electronic and metalcore with addictive pop choruses in singles Filth Friends Unite and NZT48 proved that metal isn’t the only genre that can throw down. Digital Renegade also featured an interesting conspiracy theory-centric theme throughout, asking what happens if the system we are governed by shuts down all means of communication between ourselves. Digital Renegade not only sharpened I See Stars’ sound, it ended up defining their overall approach as a genuinely exciting band.

Releasing anything after the emotional phenom that was Diamond Eyes was going to be a tricky endeavor, but Deftones succeeded with aplomb. Bursting with the kind of nocturnal, late night sense of longing atmosphere the band are so adept at, “Poltergeist”, “Swerve City” and “Tempest” also just flat-out GROOVED. The tragic passing of bassist Chi Cheng embued this record with a lot of uncertainty but also a lot of love and focus. All eyes and ears were on Deftones when Koi No Yokan hit and for good reason. This was part two of the best 2 album streak in the band’s career.

By the time lead single “Against Them All” hit YouTube, there was absolutely no denying that Stick To Your Guns made explosive anthems. Diamond brought with it a razor-sharp aggressive impact that felt particularly driven in tracks like “Such Pain” and “Empty Heads”. “We Still Believe”, on the other hand, gave the likes of accessible arena punk rock cohorts Rise Against a run for their raucous sing-along money. No one was more aware of the social climate than frontman Jesse Barnett at this time either. Diamond represents massive personal growth for his views on his own perseverance, acceptance for all races and equality no matter someones’ sexual orientation. Diamond was an angry record for all the right reasons and is just as vital today.

Following the divisive, post-hardcore leaning The Here And Now, Architects found a way to merge the unbridled chaos and technicality of their earlier records with the atmospheric post-rock experimentation of the direction taken most recently. The result was, at its best, quite incendiary and more politically-fueled than ever. “These Colours Don’t Run” and “Devil’s Island” show this wonderfully and Sam Carters’ scream-sung melodies became more addictive and substantial. A great period of growth in the band, particularly here in the states.

Dare me to jump off this Jersey-….nevermind…

If you were following the scene style of music and culture around it in Summer 2012, you know just how inescapable “King For A Day” was. Its bank heist music video was a YouTube smash hit, featuring Sleeping With Sirens’ Kellin Quinn in a substantial guest feature. Through Collide With The Sky, Pierce The Veil’s creative style of post-hardcore really found its sweet spot and was both lyrically and musically a heavier step-up for the band. Tackling themes of suicide, remorse and depression, the band met the darker lyrical tone with a more bombastic style that really suited them well but still maintained the playful nature of the band’s sonic footprint. The best Pierce The Veil record.

tags: all time low Architects Crown The Empire Deftones Enter Shikari every time i die I See Stars Periphery Pierce The Veil Stick To Your Guns The Ghost Inside Top Albums of the 10s Yellowcard
previous TOP ALBUMS OF THE 10S: 2011
next METAL WORLDWIDE: BLOODYWOOD - "INDIA'S NEXT FOLK METAL SENSATION"