ALL TIME LOW RELEASE ACOUSTIC VERSION OF “SLEEPING IN” 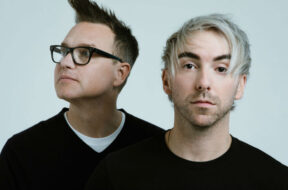 January 28, 2019
Alfredo Preciado
Mark Hoppus of Blink-182 and Alex Gaskarth of All Time Low have announced the creation of their new band Simple Creatures. Additionally, the duo have released their first single together titled “Drug” (produced Zakk Cervini). “Drug is always the first song we play people when introducing them to Simple Creatures, so it only makes sense that it’s […]
Read more

January 27, 2017
Michael Bird
They’re so big in their native Japan that Fall Out Boy are supporting them on their upcoming tour. But you’d be forgiven for not having heard of ONE OK ROCK before now, as they’ve never earned as much attention from Western listeners as Babymetal or even Crossfaith. The game plan of new album Ambitions is to […]
Read more

September 2, 2016
Alfredo Preciado
All Time Low have released a brand new song titled “Take Over”. The song is from the band’s CD portion of their upcoming Straight To DVD sequel, which is due out on September 9 via Hopeless Records (pre-orders available here). Stream “Take Cover” now below.
Read more