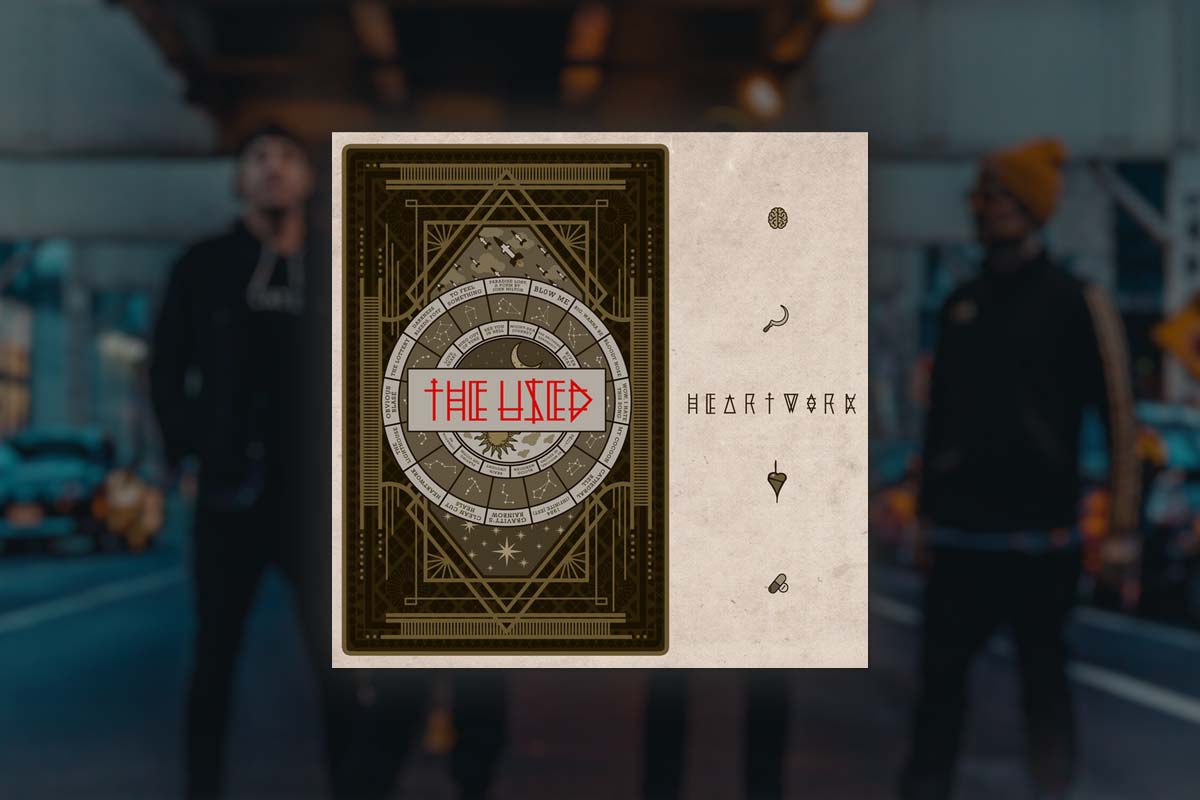 Legendary emo veterans The Used have released the deluxe edition to their 2020 album ‘Heartwork’, an incredibly experimental record focused around famous literary tales and themes of self discovery and exploration.  The album featured a wide array of musical influences and many fantastic collaborations from artists such as Travis Barker & Mark Hoppus (Blink 182), Caleb Shomo (Beartooth), and Jason Aalon Butler (Fever 333). One year later, the band have already topped what was already their most ambitious project to date, expanding the 16-track epic into an deluxe edition adding on 11 new unreleased songs and essentially turning the project into a double album in a grandiose and enormous fashion.

Clocking in just shy of 80 minutes in length, ‘Heartwork (Deluxe)’ is a sonic journey, pulling the listener in every direction and captivating attention spans with shocking twists and turns and bold sound pallette for a rock band that has never shied away from experimenting with new sounds. Enigmatic frontman Bert McCracken delivers some of his best vocal performances in years on the tracks, showcasing spectacular control and range over his voice, aesthetically pleasing to the instrumentation at all times on the record. His unique tones and powerful range continue to prove his place as one of the top recording vocalists in the genre, an impressive feat for a band who is in its 20th year of activity.

“Paradise Lost, a poem by John Milton” kicks the record off with a rush of adrenaline, bursting with energy and raging with distortion in a track sure to please any fan of the band. The track’s soaring chorus is instantly catchy complimenting the instrumentation’s bouncy groove adding tons of replay value and repeatability to the short track. The second to last track on the record “Darkness Bleeds, FOTF” features a similar vibe to the opener. Reminiscent of the band’s self titled record, the track is full of charging riffs and anthemic choruses with electronic breaks and a groovy breakdown.

“Blow Me” is the heaviest song on the album, a manic post-hardcore cut featuring Jason of Fever 333, seething of the combination of the Fever’s pure aggression and The Used’s untamed emotion. Frantic vocal deliveries and discordant guitar riffs pummel their way through the track’s backbone, complimenting the song’s incredibly dark lyricism and bold statement on America’s history of gun violence, questioning those who commit gun crimes directly with “what if you had a gun?/Would you use it like I did?”.

McCracken also added that the song has a secondary message, stating the following,

“We are also very aware of how impactful small statements can be, and in this world where everyone feels like they are almost the center of attention with social media, I think that it’s important to accept how powerful words are.”

This same aggressive edge is channeled during the stunning breakdown of “The Lottery”, detailing an annual rite and calling into question toxic traditions that we as a society take for granted and don’t speak out against on though they’re harmful. Inspired by a short story written by Shirley Jackson, the track is a collaboration with Beartooth’s Caleb Shomo, who makes his presence known during the song’s heaviest moments, passionately screaming with untempered exasperation in one of the best features on the record. It’s soaring chorus hooks itself permanently into the listeners brain, instantly being memorable and lodged in your head after just one listen. It’s my personal favorite track on the album with some of the most massive sounding moments on the entire album.

Waves of nostalgia drip from the pores of “Obvious Blasé”, a track released in collaboration with Travis Barker of Blink 182. The song that feels like a modernized adaption of the band’s 2002 classic “The Taste Of Ink”, with choppy clean electric guitar verses and a timeless pop punk chorus that instantly has the listener singing along to. The track has a tasty bass presence that perfectly compliments Barker’s signature drumming style, providing life and a boost of energy to the song in bassist Jeph Howard’s shining moment on the record. The upbeat power-pop deluxe track “The Brothers Karamazov” has a similar vibe, drawing lyrical inspiration from the classic novel of the same name over catchy melodies and hooks.

The Used further shows their fearlessness on the forefront of sonic exploration, taking on mainstream pop soundscapes with “Cathedral Bell”, and “Clean Cut Hands”, with the former being a synth-driven cut that wouldn’t feel out of place on superstar Billie Eilish’s breakout record ‘When We All Fall Asleep, Where Do We Go?’ And the latter feeling like a b-side from Dua Lipa’s latest record “Future Nostalgia”.

“BIG, WANNA BE” stands up to influencer culture, tackling a concept that many in today’s generation face and how it’s effected our society in a negative way. The track has a more mainstream sound to it, placing a heavy emphasis on loud snare drums and bit-crushed electronics likened to that of Imagine Dragons.

“1984 – Infinite Jest” is one the most unique and creative tracks on the album, combining multiple genres and jarring structural changes that confuse the listener as much as it does intrigue with an abrupt ending. Unfortunately despite all of the respectable experimentation, the top 40-laced tracks ultimately end up as some of the weakest of the album for me, suffering from poor execution or rough production when compared to most of the record despite being fairly memorable overall.

The deluxe half of the record takes on a different tone from its’ schizophrenic predecessor, focusing more on theatrics and broadway-style vocals on many of the 11 new tracks. The hopeful “Night Sea Journey” opens the second part of the record with alternative instrumentation and an refreshing sense of lyrical optimism compared to the album’s overall bleak matter. “River Stay” and “Playing The Victim” also feature similar instrumental vibes, bursting with infectious pop hooks over alternative guitars tackling unforgiving situations with a former lover after a failed attempt at reconciliation.

“Blood Meridian” is the heaviest of the deluxe tracks, fusing bouncy Bring Me The Horizon-esque riffage with programmed drums and falsetto vocals. Unfortunately, unlike the other heavier tracks on the record, the song feels fairly forgettable overall and struggles to retain listener attention throughout its runtime due to its repetitive structure. On the other hand, rock track “Operation Me” turns up the theatrics, with tension filled chorus guitar leads and an octave shifted solo alongside one of the best choruses on the entire record, feeling like a classic track from the band’s 2000s era of their discography.

Literary references fill “Love Heart”, which details a soldier’s heartbreak missing their significant other while deployed at war. It’s a touching track that climaxes in the best guitar solo in the entire record, ripped straight out of an ‘80s classic rock ballad in epic fashion. It’s one of the best tracks on the deluxe and one that feels overshadowed simply Bc of the project’s long runtime. “See You In Hell” closes the record on a dramatic and somber note, driven by theatrical pianos and jazzy chord progressions and guitar leads. The track has a retro-feel to it, pulling from influences like The Beatles with the band’s signature emo twist. It serves as an appropriate and fantastic closer to the lengthy journey of a record with a final unexpected twist to to the album’s soundscapes.

‘Heartwork (Deluxe)’ is an incredibly ambitious project, this is shown in the record’s 1 hour and 20 minute and 27 track runtime alone, but even moreso is displayed in its own musical content. Bending genres and adapting influences all throughout rock, metal, pop, jazz, hip hop, and electronic music to mold something unique and artistic, creating a crowning piece to the band’s legacy and artistry after 20 years of existence. While some of the record’s more electronic-driven experiments fail to land, there’s just as many tracks that do hit with pinpoint accuracy and get stuck in your head after just a few listens. By this point you may be thinking however, why did The Used tack 11 extra songs onto their already ridiculous 16 track magnum opus? Well, the answer hasn’t officially been given, but it may largely be in due part to the nature of the new tracks. Some of the tracks feel too similar or forgettable when compared to songs on the standard edition, effectively being b-sides for the project, in addition to feeling dis-jointed overall with its pacing in its second-half. However, despite it’s bloated tracklist and excessive runtime, ‘Heartwork’ remains a solid effort full of gems and stellar cuts worth hearing if you’re brave enough to spin the record in its entirely.

The Used’s new deluxe edition of their most recent album ‘Heartwork’ is available on all streaming platforms now. Watch the official lyric video for “Blow Me” (Featuring Jason Aalon Butler) below.