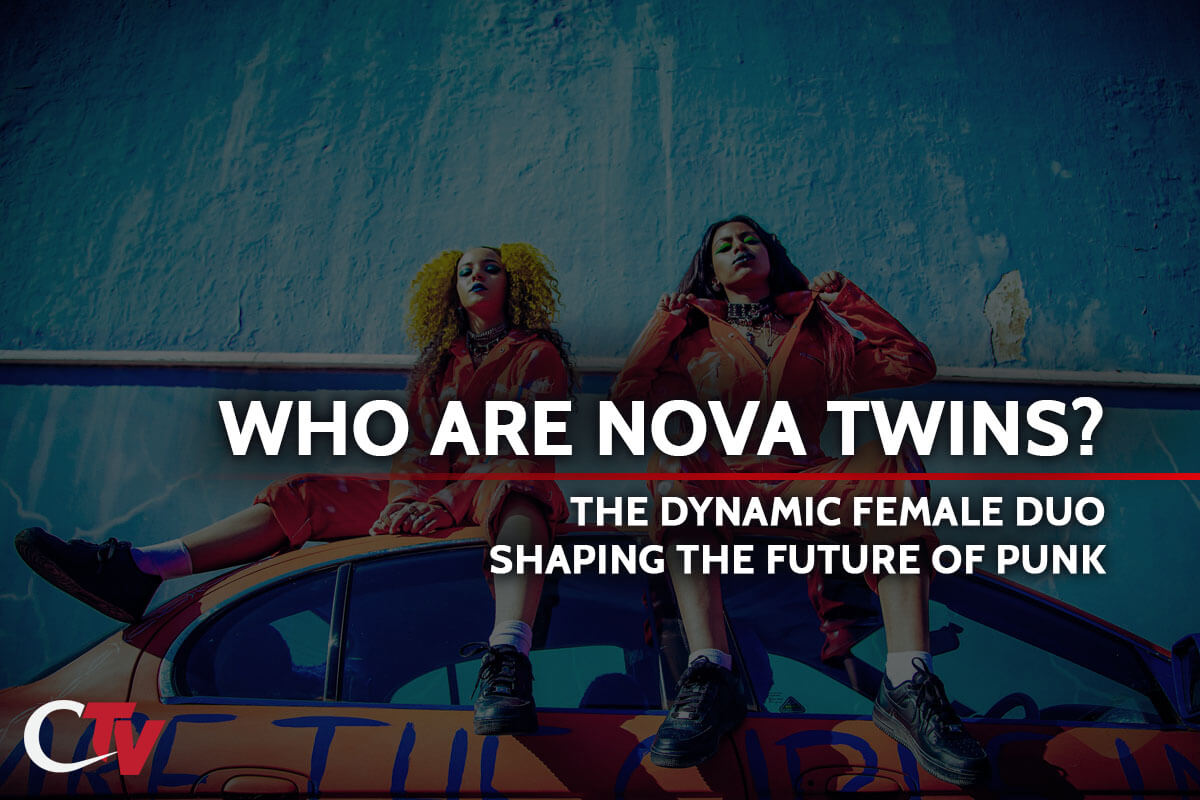 What better way to celebrate Women’s History Month than introducing you to Nova Twins, “the best band you’ve never heard of”? In case Prophets of Rage’s Tom Morello described your music radar’s current relationship with the dynamic duo who are helping shape the future of punk, we’re here to get you acquainted.

Formed in London, England in 2015, the genre-bending brainchild of Amy Love [vocals, guitar] and Georgia South [vocals, bass], came about after a decision to take their lifelong friendship and collective appreciation for rock, punk, and hip-hop one step further. After testing their musical chemistry, they agreed on a new name, recorded and released their first single, and Nova Twins was introduced to the world. Since the release of their debut album ‘Who Are The Girls?’ last February, Nova Twins’ name has been echoed with ample praise and recognition, including the title of Best U.K. Breakthrough Band at the 2020 Heavy Music Awards.

The Black female duo put a defiantly innovative spin on punk music as we know it by having a raw and exciting signature sound comprised entirely of guitar and bass— no use of synthesizers or samples necessary. Riot Grrl meets nu-metal and hip-hop to convey the concept of Urban Punk, a sound that’s as futuristic as it is unlike anything you’ve probably heard before. Nova Twins aren’t simply taking creative genius to the next level through their fusion of genres and knack for layering a vast range of sounds created with pedalboards, though. With music that persists as a commentary on the stereotypes, inequalities, and challenges women face, Nova Twins are promoting inclusivity by illuminating space in a sector of an industry that’s been historically dominated by white men.

Face it— women are objectively underrepresented in rock and heavy music, and as much as many of the genre’s respective members preach acceptance, the fact of the matter is these contradicting ideologies continue to be perpetuated to date. It’s evident by the inequality of festival lineups, the ostracizing lack of acceptance and support of women in these communities, and the trite, tired, and tunnel-vision focused “female fronted” genre categorization women in music fail to evade despite their best efforts. During an interview with NME from July of 2020, Amy Love stated “it was really hard to get people on board with the idea of Black girls in punk music… then we got supported by these successful people of color like Fever 333’s Jason Aalon Butler, Tom Morello, and Skunk Anansie’s Cass Lewis and Skin who helped open some doors for us.”

Similarly, when the Black Lives Matter movement became a widespread global phenomenon, Nova Twins noticed people throughout the music industry finally discussing its long-standing history of racism. Allyship and accountability became substitutes for silence from many of their peers, and the support brought the band a relieving sense of hope that change was finally on the horizon.

Nova Twins strive to empower unity and diversity in music, and the product they use as a vehicle for doing so speaks for itself. Powerfully blunt hooks and poised moments of vulnerability blend together to bring the same fierce, in-your-face attitude as the unique soundscape accompanying it. Whether it’s “Bullet” speaking out against unwanted advances and those who don’t understand the meaning of consent, standout smash hit that’s bound to be in your head for days “Taxi”, or loud and confident introductory anthem “Vortex”, Nova Twins’ unapologetic delivery and sense of self present throughout the catalogue of topics they tackle make it clear they’re not asking for permission or forgiveness as they demand their voices to be heard. The future of punk is unstoppable.