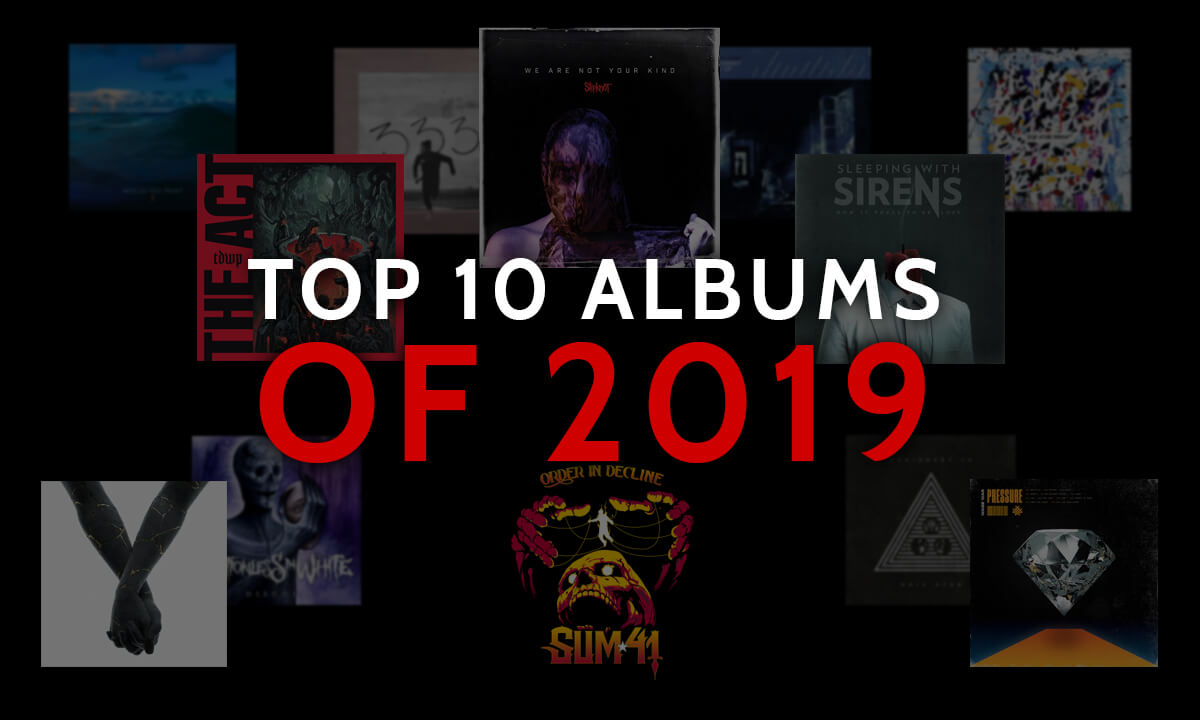 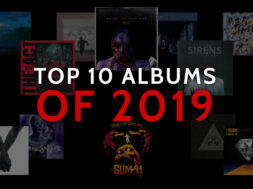 2019 seemingly felt like a divisive destiny for a large part of alternative music. Some artists fearlessly took risks, and in turn, discovered the sound they’re meant to resonate with; others plainly fulfilled their desires to showcase capabilities beyond the extent of what their catalogue had previously demonstrated. Here are the Top 10 Albums of 2019, as chosen by the CaliberTV staff and Discord server.

Sinking into a dispirited rumination on dissolved relationships, ‘Gone In Your Wake’ further contemplates the reality of heartbreak and tragedy in a musically subdued fashion. “Learn To Lose And It All Gets Easier” throws a curveball to listeners’ assumptions, while “Lost Between” and “Alone (Out Of My Head)” serve as vulnerable deliberations of the sound Thousand Below redefined for themselves without diminishing the emotion residing in the band’s most prominent lyrical motifs.

Crown The Empire uphold a confessional duality of somber and anthemic aggression on ‘Sudden Sky’. Taking a quieter, but nonetheless cinematic approach to their muse, ‘Sudden Sky’ reflectively discusses existence and technological pervasiveness in modern society on “20/20”, while “MZRY” and “Blurry”— debatably the band’s best song to date— combat hindrances encountered when seeking truth and meaning without sounding homogenous.

Highly regarded and legendary in the realm of metal, Slipknot throw listeners for a loop and embrace anguish on ‘We Are Not Your Kind’. Hard-hitting “Unsainted” revolves around its maniacal percussion and catchy chorus, and “Red Flag”’s chaotic instrumentals complement a growling cadence to create an atmosphere of brutally unbarred aggression. Pervasive idiosyncrasies render ‘We Are Not Your Kind’ one of Slipknot’s heaviest and most experimental albums.

Toss the idea of alarmingly heavy out the window with a vengeance; storytelling through transitional creativity is the theme on While She Sleeps’ fifth album ‘SO WHAT?’. Album opener “ANTI-SOCIAL” explodes into nuanced percussive sounds and discernible punk influence in its forthright dismissal of societal interactions lacking substance. “THE GUILTY PARTY” runs a course mercilessly ripping listeners from comfort with choir-backed R&B beats, a muffled spoken bridge, and no shortage of riffs; pop-rock “GATES OF PARADISE” draws the conclusion ‘SO WHAT?’ is surprising, but not unfamiliar.

Tenaciously breaking previously established genre constraints in favor of testifying to Wage War’s multifaceted skillset, ‘Pressure’ is an enhanced and inventive exposition within the band’s sound. Each component of the album’s repertoire holds individual significance in its precise effort to balance moments of intensity and lighter ambience. A melodically fuelled style of metalcore presents itself on “Low”, only for listeners’ expectations to be staggered by softer tracks revolving around an undeniably catchy hooks like “Grave” and ballad-esque album closer “Will We Ever Learn”. ‘Pressure’’s spirit, rooted in agony and personal experience, is carefully curated to pique interests of masses.

Demanding listeners to leave their preconceived notions of modern rock in the dust, ‘OK I’M SICK’ brings a candid edge to Badflower’s powerfully weaponised songwriting. The album’s passionate and dynamic instrumentation step out of the spotlight on “The Jester”, where vocally emphasised captivation strengthens as the song progresses, and chillingly detailed, heart-wrenching recounts of calls for help “Ghost” and “Daddy” affirm how ‘OK I’M SICK’ remains deeply emotional, relatable, and loyal to its creative character.

An ambient concoction of synthwave, pop, and rock accompany ‘Sleeptalk’’s deeply personal conversation. Delicately straying from traditional post-hardcore without sacrificing topical depth in the process, Dayseeker’s pivotal fourth album finds disheartening relief in misery, touching on addiction and disintegration of familial bonds on “Crash and Burn”, the pain of witnessing another’s devastating battle with mental illness on “Starving To Be Empty”, and the resulting failure of relationships taken for granted on “Burial Plot”.

Introspection, hope, and thinking as an individual are regally amplified throughout Bad Omens’ enigmatic sophomore album, ‘Finding God Before God Finds Me’. Ridiculously heavy and relentless “Dethrone” approaches the concept of faith with vehement anger, while “Mercy” endures a more critical self-analysis and questions the innate blindness of humanity. The visceral emotion on “Careful What You Wish For” and upbeat pop melody carried in “Burning Out” complement resounding themes of peaceful healing and overcoming loss, ultimately presenting ‘Finding God Before God Finds Me’ as a stylistically versatile ascension from the sound curated on the band’s debut album.

Boasting the best production of any Northlane album, ‘Alien’ wanders down the band’s darkest less-traveled path and reinvents the sounds of nu-metal in the process. Thematically and musically heavy, vocally aggressive “Bloodline” details the strain of upbringing in an environment ridden with abuse and addiction— displaying one of Northlane’s most raw and heartfelt lyrical narratives yet— while “Details Matter”’s vicious testament to survival speaks for itself as a peak mode of the band’s operation. Skillfully woven industrial and electronic influences emphasise the album’s clear sonic persona, and with perplexing cohesion, give ‘Alien’ innate memorability.

Before any kids on the ‘gram who used to be fans were moshing in their rooms to “Dear Diary”, heavy music trendsetters Bring Me The Horizon placed their faith in listeners’ hands with ‘amo’— an album equally diverse, innovative and defiant. Emerging from fearless experimentation and genre fluidity, collaborations with mainstream artists like Grimes on “Nihilist Blues” and Rahzel on “Heavy Metal” demonstrate limitless evolution of sound, while resonant anguish, regret, and existential crisis on songs like “Medicine” and “Wonderful Life” maturely drift through some of the album’s most lyrically vulnerable territory. Upon its release, ‘amo’ was dramatically more divisive amongst listeners than ‘That’s The Spirit’— to the extent of raising the question whether Bring Me The Horizon could still be considered a metalcore band for many, but few musical identities persist with the same unapologetic ambition.