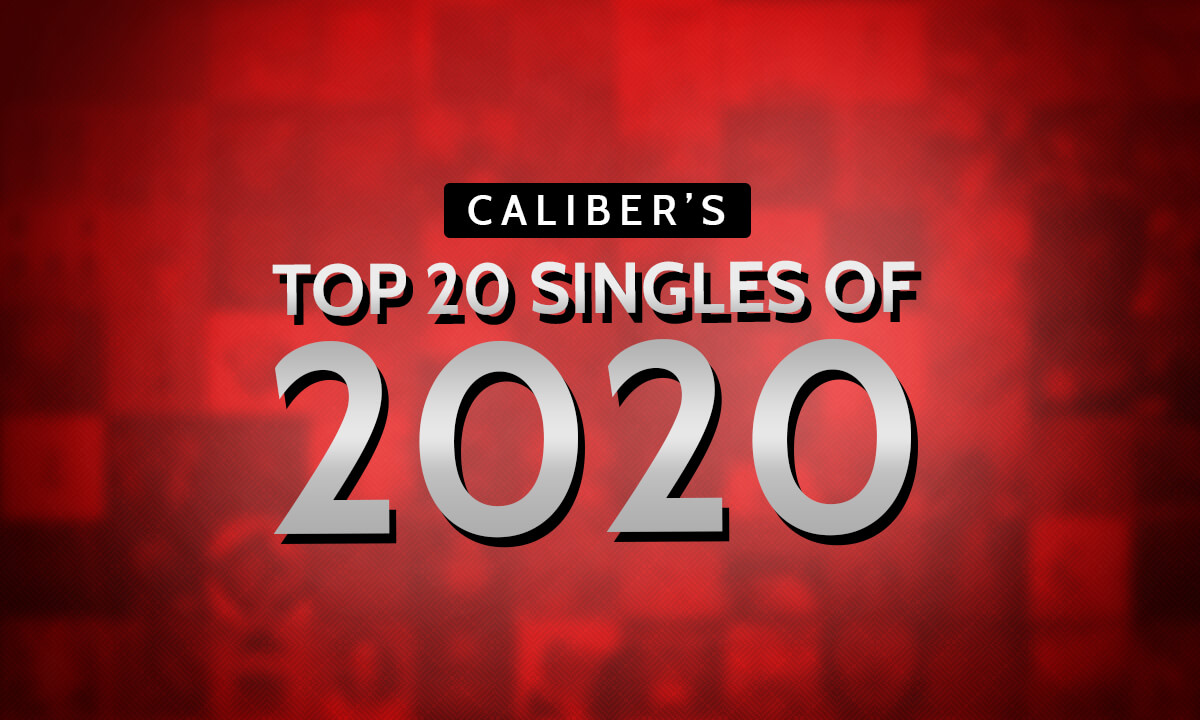 It is no secret that 2020 has been a rollercoaster of a ride. We’ve seen some serious highs and lows this year, but fortunately, we can say that when it comes to the music- the scene has been gifted with some pretty kickass releases from beginning to end. While there have been an insane amount of phenomenal album releases, there’s been a few tracks in particular that packed a punch harder than the rest. From killer breakdowns, to stellar vocals and groundbreaking frontmen (and women!), here are some of the best singles of 2020!

“Kicking off our list of top 20 singles of 2020 is none other than metalcore band Alpha Wolf’s track “Akudama”. The summer single,  which was released leading up to the band’s September 2020 album ‘A Quiet Place to Die’ had the scene raving from the second it dropped. The song features some seriously brutal riffs right out of the gate, with solid screams and all around vocals. (Yes, metalcore fans, all the BLEGH’s, too.) Let’s not forget the “A-ku-da-ma” breakdown that was stuck in our heads the entire summer, too. The band was able to prove that they are a force to be reckoned with in the scene after this track, and set us up for an overall fantastic album. Alpha Wolf’s “Akudama” definitely proved itself to make the cut onto our top 20 of 20!”

“Traversing the human psyche to examine the way we extend love and truth to others is a part of Holding Absence‘s greater mission: uncovering the power of emotion. “Beyond Belief” is undeniably refreshing for alternative music and builds itself on an ethereal cornerstone that welcomes vulnerability and introspection.”

“This one is for our OG Pop-punk stans.

Pop-punk powerhouses Neck Deep dropped their single “Lowlife” earlier this year- the first single released off of their album ‘All Distortions Are Intentional’. While other singles like “I Revolve (Around You)” and “When You Know” could have certainly held up as contenders to be on this list to rep the pop-punk scene, there was something about “Lowlife” and the old school, almost Green Day’s “Dookie” or older Blink 182 era vibe it gave off in terms of lyricism and instrumentals. The track is the definition of classic pop-punk, and does it’s job of just being all around fun to listen to.”

“In July of this year, California native Post-hardcore band Movements dropped their single “Don’t Give Up Your Ghost” off of their latest album ‘No Good Left to Give’ – and considering this was the band’s first release since their 2017 hit album ‘Feel Something’, the group did not leave us disappointed in the slightest. This was the first single released off of the album, and it still holds up as being one of the best tracks on the album. While others like “Tunnel Vision” and “Skin to Skin” featured Miranda’s fantastic vocals and lyricism, there was something about the stripped down simplicity of “Don’t Give Up Your Ghost” coupled with the lyrics that deal with themes of mental health that resonated so deeply with us as well as the band’s fans. Considering how much the track “moved” us, Movements “Don’t Give Up Your Ghost” earned itself a spot on our top 20 singles list!”

“One of Cane Hill‘s most on-brand expositions of sound to date speaks to the band’s collective endurance of trials and tribulations, calling upon divinity to reclaim their power as with unmitigated fury. ‘Manifest the power of the high.’“

“Few metalcore bands bridge the contemporary production stylings of pop with heavy sections as well as Outline In Color’s new material. “Alibi” in particular nailed this. The good news is, there’s more where it came from already on the way.”

“Like Moths To Flames pound gravel six feet below into the dirt the moment “Habitual Decline” fires off. After taking a left turn into more emotional and atmospheric territory on ‘Dark Divine’, Chris Roetter and co bring more fury than ever. With an emphasis on huge low end guitar stabs and soaring choruses, LMTF sound refined here.”

“Truly explosive, napalm-incinerating metalcore is few and far between these days. Polaris must know this because “Hypermania” packs enough to level a skyscraper. In it, they are able to somehow marry Every Time I Die’s southern groove with the unchecked anger of Like Moths To Flames.”

“Emmure‘s 2017 album ‘Look At Yourself’ called for a direct response: ‘Hindsight’; where the former seethes with visceral bitterness and anger, the latter returned with callous savagery. The instrumentation on “Thunder Mouth” gives a nod to the former album’s style and nu-metal’s golden era, with Frankie Palmeri delivering one of ‘Hindsight’s best tracks in tenacious character.”

11. System Of A Down – “Genocidal Humanoidz”

“True activism is rooted in selflessness. Unapologetically aligned with System Of A Down‘s signature nu-metal persona, “Genocidal Humanoidz” off the band’s two-track EP ‘Protect The Land / Genocidal Humanoidz’ cleverly costumes the war in Artsakh as a metaphorical devil Armenians tirelessly fought in hopes of history not repeating itself.”

“Charting a clean-cut and bold turn of direction, “Talk To A Friend” quickly became one of Slaves’ most successful tunes. It rocks enough to feature on Octane but is moody enough to feature in between The Weeknd and Jordan Fisher on your Spotify playlists.”

“Starting out with a melancholic and reflective vibe, “Strawberry’s Wake” could fool a listener. After the surprisingly introspective lyrics “Guess I can turn my woes into familiar melodies”, the familiar, summery Dance Gavin Dance vibe comes in. Between Jon Mess’ encouraging verses and Tilian Pearson’s windows-down inducing refrains, this is a perfect demonstration of DGD’s juxtaposing dynamics. And it’s a blast.”

“Kingdom of Giants returned to reinvigorate modern metalcore with ‘Passenger’‘s third chorus-driven single “Wayfinder”, whose discourse wearily searches for relief and meaning in the midst of an existential contemplation. It’s clear Kingdom of Giants‘ sound has evolved into a new clear-cut, futuristic persona to yield their most cohesive and innovative album yet.”

““Two-Way Mirror” is an essential part of understanding Loathe‘s perplexingly diverse sophomore album “I Let It In And It Took Everything”. The song’s mesmerizing shoegaze aura layers dream-like airiness with dissonance as vocalist Kadeem France poetically details how staring down another inherently results in subsequent self-examination. “Two Way Mirror” is incomprehensive to some, but in context of the album, ultimately presents one of its most beautifully cathartic moments.”

“Machine Gun Kelly’s 2020 genre switch certainly flipped the Pop-punk scene on it’s head this year, especially after the release of his incredibly catchy single “my ex’s best friend” off of his full length album ‘Tickets to my Downfall’. Along with his other single “My Bloody Valentine” (which is also an absolute banger) the song quickly made its way to the mainstream radio waves, and even after the release of the entire overall stellar album, is still a fan favorite and taking over the radio even months after the release. Considering this single has started bringing some light back to the alternative/ Pop-punk genre while collaborating with pop artist Blackbear simultaneously, Machine Gun Kelly’s “my ex’s best friend” has earned a spot on our list!”

“A single moment of reconciliation yields a rock anthem attesting to our self-sabotaging ability to spiral into bleak and dismal headspaces devoid of hope; “Animals” stands out as the refreshingly unorthodox start of a new era for metalcore trailblazers, Architects.”

“A tale of tours and typefaces implored Bad Omens to do what musicians do best: write a song about it. The quartet’s unassuming deluxe reissue of their sophomore album, ‘Finding God Before God Finds Me’ gave way to “Limits”— a song that remains idiosyncratic amongst the band’s repertoire and holds the crown for the best diss track of 2020. Jokes aside, “Limits” is where Bad Omens truly embrace a new sound with striking and unapologetic confidence, and vocalist Noah Sebastian relays it in criminally exceptional fashion.”

“German metalcore group Eskimo Callboy threw the scene a massive curveball this year with their electrifying and weirdly incredible single “Hypa Hypa” off of their EP, ‘MMXX’. The song, in short, is an experience that somehow throws us into a spiral of early-mid 2000’s scene Myspace- yet it is executed beautifully. Not only are the instrumentals and overall production quality perfect, but lead vocalist Nico Sallach, who joined the band this year after departing from his previous band To the Rats and Wolves, absolutely kills his vocals on the track. The screams and lows are arguably some of the best we’ve heard in the metalcore scene this year, on top of the song as a whole an absolute banger overall. It was without a doubt that Eskimo Callboy’s “Hypa Hypa” earns a spot on our top singles of the year at number three!”

2. Bring Me The Horizon – “Teardrops”

“Coming in at number two on our list runner up for the top singles of 2020 is none other than Bring me the Horizon’s very own “Teardrops” off of their newest album, ‘POST HUMAN: SURVIVAL HORROR’. The single, which was the fourth and final single released from the album following “Ludens”, “Parasite Eve” and “Obey (Featuring Yungblud)”, truly gave us some of the band’s best work. Everything from the relevant and relatable lyrics coupled with Sykes incredible and signature vocals, to impactful instrumentals and overall building composition of the track, it was without a doubt that this single was not only the band’s best of the year, but one of the top in the scene as a whole.”

“Spiritbox took every corner of the heavy music community by storm with their single, “Holy Roller”. Tapping into the implicit darker and macabre side of their musicality, the charting single creates an atmosphere that’s nothing short of pure, unadulterated terror. “Holy Roller” executes a creative concept exaggerated to epic proportions marvellously; bending and dissonant guitars accompany maniacal percussion, layered synths add to the song’s dark and foreboding ambiance, and Courtney LaPlante’s voice reverberates ferocity– all with incalculable precision. This song chewed the expectations of metalcore listeners everywhere and spit them out with a nerve few acts have come close to demonstrating, rightfully so, “Holy Roller” is the song of the year.”