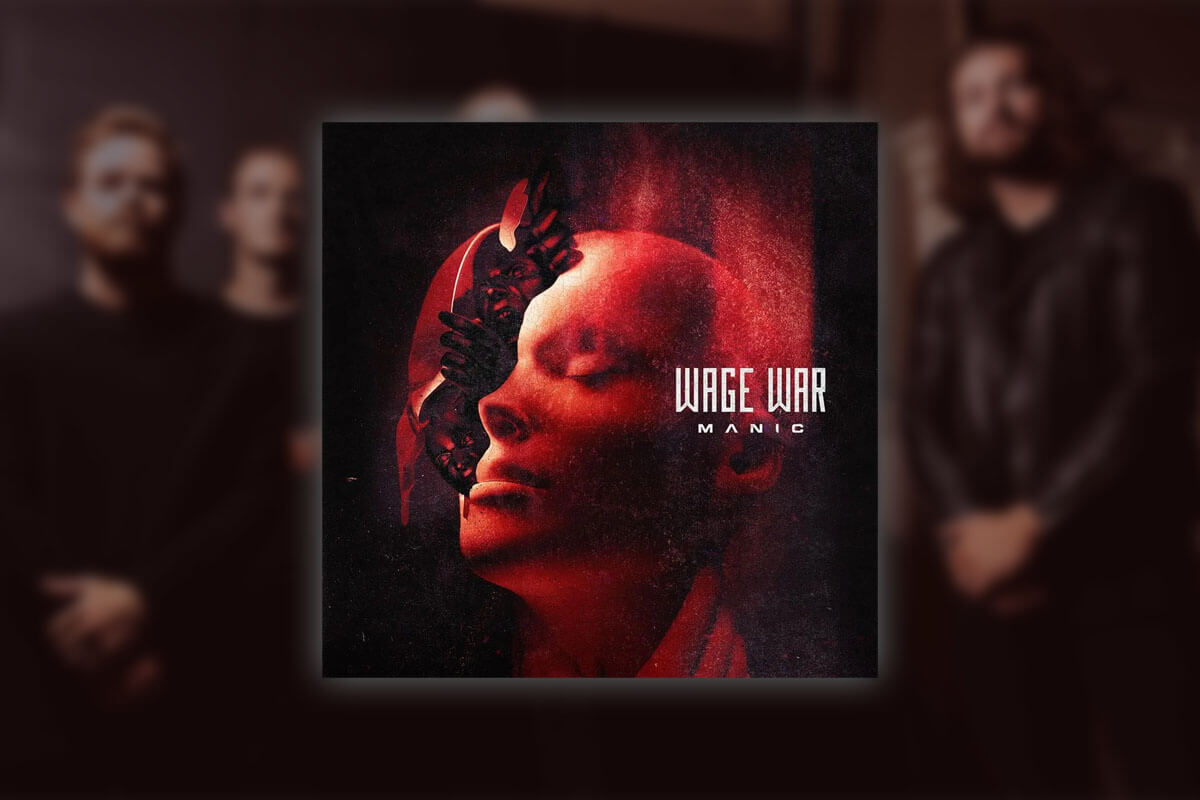 One of the fastest-rising metalcore acts of the past half-decade, Florida’s Wage War climbed up the ranks as one of the biggest bands in the scene. ‘Manic’ is the group’s fourth full-length studio album, showcasing a newfound sense of creativity as the veterans combine the arena rock anthems of 2019’s ‘Pressure’ with the grittier screams and chugged breakdowns of ‘Blueprints’ and ‘Deadweight’ amongst nu-metal influences. Hit single “Teeth” is the perfect example of this combination, featuring bouncy down-tuned guitar riffs and clean vocalist Cody Quistad’s signature massive choruses alongside programmed hip-hop beats.

“Relapse” opens the album on an energetic note, satisfying fans of the heavier side of their sound with one of the most insane breakdowns the band has ever released and a punishing intro riff. The track feels like a more modern version of 2019’s “Low”, with pummeling riffage from Seth Blake and filthy screams from Briton Bond. The track is a great opener to the record and sure to become a fan-favorite from the album.

Slipknot-influenced lead single “High Horse” is one of the heavier moments on the album, a fiery pit starter seething with anger dripping from it’s pores. The brutal track contains one of the best vocal performances on the record, entirely screamed by Briton Bond, who further proves himself to be a force to be reckoned with. Stephen Kluesener kills it on the drums, feeling right in his element bringing the track to life and adding to to its heaviness.

“Death Roll” is the heaviest and most metal song on the album, continuing the Slipknot influences once again with bludgeoning instrumentation and visceral verses. Briton Bond once again showcases his incredible vocal chops on the track, bursting with rage and expressing a full range of low and high screams. Lead guitarist Seth Blake’s playing shines on this track, with an endless unrelenting assault of filthy riffs and technical solos cutting like knives through the mix. Pitch harmonics and syncopated chugs dominate the track’s main riffs, setting the tone track’s creative and jarring breakdown. It’s the most enjoyable and best track on the album in my opinion.

Wage War explore previously uncharted territory for the band on the album’s title track “Manic”, a dark hip-hop influenced cut that serves as the most jarring and off-putting song the band has released to date. The track builds into schizophrenic guitar breakdowns that perfectly depict a manic sensation as it grows more chaotic and unstable throughout its runtime. It’s one of the most unique and unusual songs Wage War has ever released, going into a route nobody expected them to, with Briton giving almost rap-like flows in the verses over electronic beats and rhythmic guitar playing. While I respect the creativity and the experimentalism of the track, it feels incredibly jarring and ironically out of place with the rest of the record. The song is extremely repetitive with building intensity that ultimately just fell flat after a couple listens for me and don’t get me wrong, it was a cool initial idea, but it’s execution on the song feels like kind of a train wreck. Thankfully, this is the only track like this on the album and the aforementioned “High Horse” gets things going on the right direction again.

The aptly-named fast-paced rocker “Godspeed” feels straight out of Beartooth’s 2018 album ‘Disease’, with pummeling hardcore punk riffs and and an instantly catchy chorus with one of the strongest hooks on the album. Bond and Quistad layer over each other’s vocals on the track, creating a massive sound and arena-like atmosphere. Bond’s cleans even sound similar to that of Beartooth frontman Caleb Shomo on the song, which is fitting considering Wage War just recently got off of tour with the band.

Arena rock cuts “Slow Burn” and “Circle The Drain” feel made for Sirius XM Octane radio, laden with pop melodies and clean vocals throughout. The former has a fantastic breakdown but ultimately the tracks fail to standout amongst their surrounding track list peers and fall into tropes of the genre. The tracks are also heavily compressed, which makes for an at times muddy guitar mix that takes away from the enjoyability of the songs for me. The latter is one of the most positive tracks on the album, learning from past mistakes in an attempt to take responsibility and inspire change in the broken world we live in.

“Never Said Goodbye” is a heartbreaking grief-stricken ballad dealing with the aftermath of a loved one’s passing. Quistad sings his heart out on the track over slightly country-influenced rock instrumentation that provides a change of pace from the metalcore offerings of the rest of the album. It’s an incredibly emotional and weighty song that resonates with anyone who has tragically lost a loved one when least expected. The song tries to spin a more positive take on the subject with an underlying message of making the most of your time on Earth and being there for your loved ones who are still living. The track also has a beautiful guitar solo full of feel that adds a lot to the emotional atmosphere of the track.

“True Colors” and “If Tomorrow Never Comes” end the album on a heavy note, leading with bombastic riffs and groovy breakdowns. Both vocalists nail their respective roles on the songs, breathing more life into already lively instrumentation. The latter is a stellar closing track, opening with a punishing verse and filthy screams as the track builds into an obliterating breakdown. Kluesener kills it on the track, with one of his best drum performances on the album. The tracks final moments crescendo into a chaotic and theatrical breakdown that serves as a perfect ending to the record.

Wage War’s ‘Manic’ feels like the natural and logical follow up to 2019’s ‘Pressure’, a grittier; darker release full of stadium-ready choruses and spine-chilling breakdowns. It’s Wage War doing what Wage War does best with a sense of passion and some hints of innovation in an albeit relatively “safe” offering from the band overall.