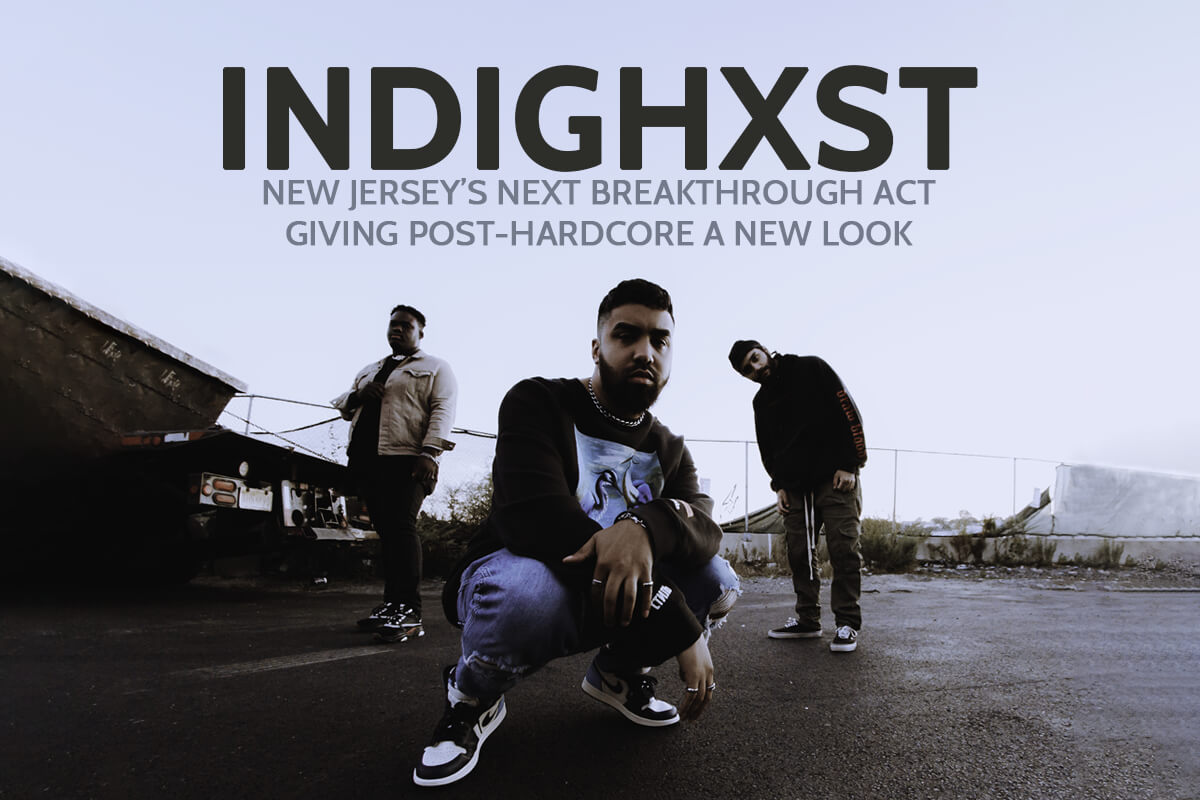 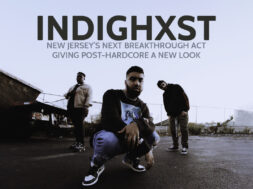 New Jersey’s latest crème de la crème takes shape in the alternative rock four-piece Indighxst. With a rich blend of hip-hop and rap, layered with mouthwatering metal riffs and glazed over with a shoegazey feeling – fans of ISSUES, The Plot In You or Polaris will find themselves entangled in the world Indighxst have created.

We sit down with vocalist Wesley and guitarist/producer Denly to become better acquainted with these rising underdogs, set to take over 2021. “It’s been a challenge, we’ve all been trying to survive” Denly says as he explains the bands current circumstances with COVID throwing a wrench into touring. “You can’t perform,” adds Wesley “so you have to really invest a lot in the stuff that people are gonna interact with from home like music/visuals etc. But we do have some stuff coming that we can’t wait to show everyone.”

Indighxst may seem like another fresh-faced band early into their game, but these dark horses have been kicking around since early 2012 – their recent signing to Dreambound and music video for “Pyromance” had arguably been the catalyst to their widescale discovery. Indighxst pluck their inspirations from a vast spectrum, from Volumes, Northlane, Lower Definition, Woe, Is Me to Drake, The Weeknd, Craig David, Justin Timberlake and Usher. Denly notes that his bond with Wesley formed in high school over their particular love for Dance Gavin Dance.

Those foundational years became the building blocks of character and persistence for this band, indulging in nostalgia the pair shared anecdotes of that time “well our first demo was recorded using a coat hanger and pantyhose as a pop filter over a rock band mic” Wesley chuckles “Wesley and I used to record on a Rockband USB microphone in my basement during our earliest days” adds Deny, “It’s really cool looking back on times like those,” the vocalist elaborates “shows where we’d play for maybe 5 people in a crowd and still feel great afterwards. It truly puts a lot in perspective.”

Having a head start has given them a strong hindsight into the realistic expectations to have. Whether it’s transitioning from Limewire to Spotify or MySpace to Twitter, Wesley notes the biggest development for him is “streaming have helped us and so many bands like us in the past few years. We truly do live in a digital age where if you’re making yourself available to the right audience and you’re putting the effort into your art and promoting it, you’re bound to reach someone. There are people in countries all over the world who listen to us and maybe that’s something we may not have been able to achieve without streaming platforms.”

New Jersey natives at heart, given the chance they happily gushed of admiration for their local music scene. “I really like the NJ heavy music scene,” says Denly “what I like most about the scene is that some of the bands that inspire me the most are bands with members that are friends of ours. It’s always cool as hell to listen to fire music and think ‘Damn, I really know them in real life.’ That’s crazy to me.”

Indighxst aren’t your carbon copied band churning out sales for the sake of it, the core of their band relies on their chemistry between members and their love for music. Trying to summarise each other with one word they both agreed that bassist Bryan was easily the dad of the group seeing as he’s a real-life father, “[Bryan] is the most organized, and has his shit together while ironically being the youngest member” Denly notes “Wesley, I’d say “Kelso” because we love to jell off (tease) him.” Wesley chimes in “[Bryan] truly is an old man who’s wise beyond his years in a young man’s body. For Denly I’d say mastermind because that’s his role in the operation. He also happens to be the looks.”

Touching back on their arrival into music, Indighxst’s journey as musicians and fans in the alternative/rock/metal scene is one that is just being acknowledged and understood. “As a Black member of the band and heavy music community I’ve been fortunate enough to have never experienced any direct, egregious examples of racism” Denly comments “I’ll give this scene it’s credit for being good with condemning racism on that level. But on smaller levels that include non-Black musicians using the n-word and perpetuating racist/anti-Black narratives and microaggressions behind closed doors, you always hear about that, but to be honest, that’s something that you learn to expect while navigating through predominantly white spaces. This is because many people think racism and anti-Blackness is limited to blatant examples of it, such as calling someone the n-word with a hard ‘R’. People who aren’t Black, POC, or who weren’t raised around us, don’t always understand that.”

“there’s definitely is a bit of a stigma over the alternative scene that it’s mostly white skinheads with piercings, head banging and moshing but that couldn’t be further from the truth.”

Wesley comments on his own experience “there’s definitely is a bit of a stigma over the alternative scene that it’s mostly white skinheads with piercings, head banging and moshing but that couldn’t be further from the truth.” The vocalist stressed that people often forget rock is black art form and it’s all inclusive. There are so many bands with members of different colour, creed, sexual orientation etc. I’m Dominican and Salvadorian so seeing Latino and Black artists in rock was so important to me growing up. Alternative music has so many different styles and it’s cool to add to that melting pot.”

When it comes to all things new releases the duo say they’ve got new stuff coming out sooner than you think! “We have a bunch of songs that we wanted to drop on an album” the guitarist says “but now we’re looking to drop them as singles until an album makes sense. We already have the final master back for our next single so definitely expect that before the end of 2020.” Wesley noted that the forthcoming release is his favourite song ever – much to be excited about.