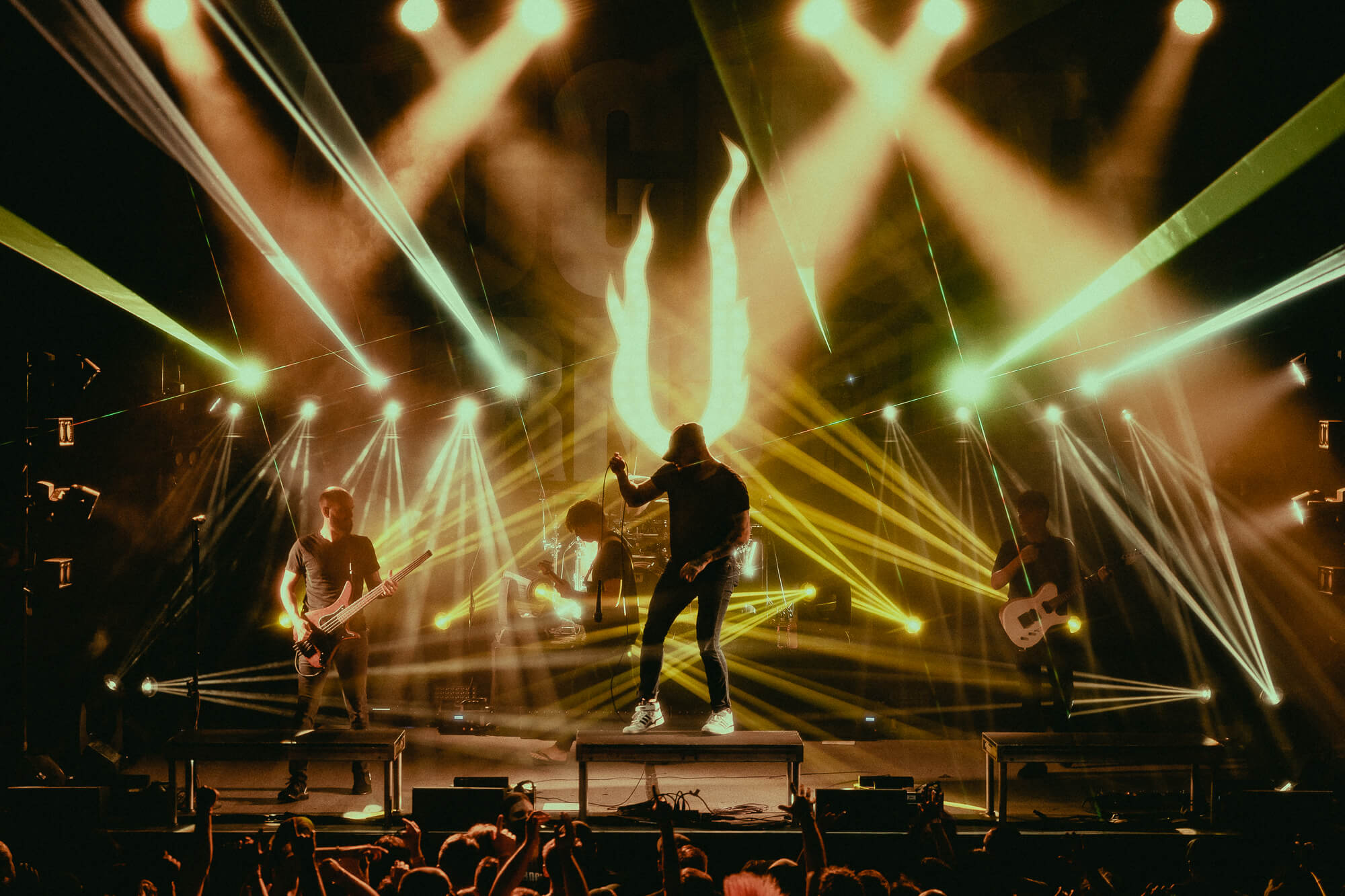 ‘Leveler’ — the critically-acclaimed fourth studio album by Pennsylvania metalcore 5-piece August Burns Red turned 10 earlier this year. In celebration, the band released a re-recorded version of the album featuring guest appearances, alternate turnings, and new guitar solos. Additionally, a massive 43-date U.S. tour was announced where the band promised to perform the record in its entirety.

Fast-forward to October 14th, August Burns Red’s ‘Leveler’ 10 Year Anniversary Tour (also featuring Fit For A King, ERRA, and Like Moths to Flames) made its way to The UC Theater in Berkeley, CA.

Opening up the night was Like Moths To Flames. Coming out of the gate, LMTF opened their set with a major throwback in “The Worst In Me”. The tone of the night was immediately set as the crowd erupted when frontman Chris Roetter took the stage. Having released their latest studio album ‘No Eternity In Gold’ in 2020, the band also dove into performances of two of the album’s most popular tracks “Habitual Decline” and “The Anatomy of Evil”. Fans were even treated with a performance of the band’s latest single “Preservation Of Hate”, which will appear on the band’s upcoming EP ‘Pure Like Porcelain’.

Keeping the energy going, ERRA took the stage. The band, who had released their self-titled album earlier this year, opened their set with performances of their singles “Gungrave”, “Scorpion Hymn”, and “Divisionary”. After sprinkling in performances of singles from the band’s previous albums ‘Drift’ and ‘Neon’, the band closed their set with two more self-titled album tracks “Vanish Canvas” and “Snowblood”.

Fit For A King

Next up was the mighty Fit For A King. With this being Fit For A King’s first post-pandemic tour, the band’s 11 song set list predominately featured tracks from the band’s latest studio album ‘The Path’. Wasting absolutely no time, FFAK immediately blew the roof off The UC Theater with a performance of one of the heaviest tracks off ‘The Path’, “Stockholm”. The Berkeley crowd was the loudest it had been all night as the band treated fans with performances their sing-along singles “Locked (In My Head)” and “Breaking The Mirror”. Even though the crowd was already fully invested in the band’s set since the start, the energy in the room went to an all-time high when FFAK performed the fan-favorite track “Backbreaker”. The set in its entirety left fans in the crowd satisfied having heard a perfect mix of the band’s best tracks off ‘The Path’; while also being treated to set list staples from the band’s catalog.

Finally, the stars of the night August Burns Red took the stage. Beginning the set with the instrumental track “X”, the hype built in a rapid pace as frontman Jake Luhrs took the mic for a performance of “Empire”. Performing ‘Leveler’ from start to finish with some of the most awe-inspiring stage production the band has ever brought along, August Burns Red put on an absolutely perfect performance doing the fan-favorite album justice. Perhaps one of the biggest highlights of the night came when Fit For A King frontman Ryan Kirby joined August Burns Red for “Poor Millionaire” (featured on the ‘Leveler 10th Anniversary Edition’ re-release) as ABR frontman Jake Luhrs called for the fans to split the crowd in half. After the crowd called the band back for an encore, ABR closed the night off with performances from their latest album ‘Guardians’ before sending fans home with a performance of their most popular track “White Washed” — the perfect way to close out a flawless set. If you have yet to experience this tour in person, do not miss out on any of the remaining dates.