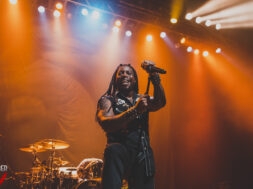 Celebrating their 20th anniversary since the release of their debut album, Sevendust embarked on a North American tour along side He Is Legend, and Never Your Zero.  Check out the gallery below as this tour made their way Rams Head! Live in Baltimore, MD with our photographer Luis Rosales providing coverage to this special tour.

Never Your Zero  was up at Rams Head Live, bringing a slightly heavier classic rock sound that appealed the crowd that showed up. It wasn’t your typical metal fans that showed up, more of the veteran rockers that enjoy the music rather than moshing to it.  Their production was nothing spectacular as they were mostly back lit with a few moments of front lighting. However everything sounded spot on from the vocals hitting his highs to the guitarist’s solos throughout their set, Never Your Zero had a pretty good set.

He Is Legend was up next to tear up the stage with their more hardcore style music with more screaming. The vocals were a mix between screaming and talking which transitioned smoothly between the two. The band had slightly more production as they were more lit in the front for more visibility. From the start, vocals were hard to hear but as the set went on, it seemed like their sound guy was able to pick up on that and fix it right away.  Since the fan base for tonight was a more older, there was virtually no one moving in the venue other than the occasional head nodding to the beat. However, with the right crowd, He Is Legend can certainly get a venue to throw down with a slightly younger, energetic crowd. For the time being on stage, He Is Legend put on a fantastic performance here in Baltimore.

For the main event, Sevendust was up next to close out the night as they celebrate their 20th year anniversary of their self titled album. Sevendust has been known to top production in lighting over every band and tonight was no exception. The band used every lighting fixture available to them to make sure they were seen as singer Lajon Witherspoon is known to be friendly with the photographers. This time around, he acknowledged the fans that were there from the beginning for the past 20 years.  Since the last time Sevendust was around, they didn’t use as much stage production like the smoke cannons they had set up, and it was a little darker but being that can’t use the same production every tour, they had to change it up a bit. Fans definitely responded a lot more and were more awake once Sevendust took the stage as they waved their hands up in the air and sang along. Being that they played their debut album in its entirety, there were plenty of song that they haven’t played live in several years which was so cool to watch. If you’re an old school fan of Sevendust, then this is the tour for you, nothing better than a band playing nothing but old material and being familiar with most of the words. Check out the rest of the tour while you still can.