PVRIS RELEASE MUSIC VIDEO FOR “USE ME” 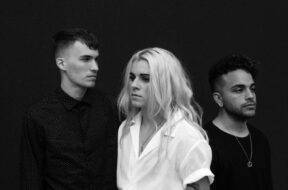 October 16, 2018
Alfredo Preciado
PVRIS frontwoman, Lynn Gunn, has revealed to fans that they have been working on new music and will continue to do so for a while. Gunn began by reflecting on the band’s All We Know of Heaven, All We Need of Hell album cycle calling it “an extremely weird/hard/beautiful cycle” before following up with the news that […]
Read more

August 2, 2016
Alfredo Preciado
With anticipation growing higher and higher for PVRIS’ follow up coming to White Noise, vocalist Lynn Gunn has revealed on social media that they currently have 45 songs written. No official word as to when we will hear a taste of what PVRIS has in store for fans, but you can check out Lynn’s Twitter posts regarding […]
Read more

July 11, 2016
Alfredo Preciado
PVRIS performed at the July 10th Warped Tour date in Hartford, CT. Vocalist Lynn Gunn made a surprise appearance during Tonight Alive’s set and performed a duet of “Lonely Girl” with vocalist Jenna McDougall. Check out the video below. When two of your favs #jennamcdougall from #tonightalive and #lynngunn from #pvris go on stage together ???????????? […]
Read more

July 6, 2016
Alfredo Preciado
PVRIS have announced they will be performing on the July 10th date of the Vans Warped Tour in Hartford, CT. Check out the announcement below. July 10 // @VansWarpedTour // Hartford, CT pic.twitter.com/jnrhFPALxm — PVRIS (@ThisIsPVRIS) July 5, 2016
Read more

June 1, 2016
Alex Lizette
In a recent interview with Upset Magazine, PVRIS briefly discussed details on an upcoming album. Although the band didn’t give much away, Lynn Gunn confirmed the band will begin recording in September or October. Head over the Upset Magazine to read the rest of the interview.
Read more

April 26, 2016
Alex Lizette
Two years since their first full length album release, PVRIS have released a deluxe version of White Noise via Rise Records. The renewed album includes two new tracks, “You And I” and “Empty”, along with a stripped version of “You And I”. With deluxe editions it’s common to just throw in the new tracks at the end, but […]
Read more