TOP 10 MOST UNDERRATED MY CHEMICAL ROMANCE SONGS OF ALL TIME

MY CHEMICAL ROMANCE POSTPONE US TOUR DATES TO 2021 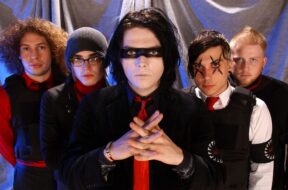 March 20, 2019
Alfredo Preciado
After nearly 15 years since its initial release, My Chemical Romance’s sophomore classic, Three Cheers For Sweet Revenge, has re-entered the Billboard 200 charts, landing on the number 191 spot. Three Cheers For Sweet Revenge was released on June 8, 2004, peaked at the number 28th spot, and remained on the charts for an impressive 78 weeks. It’s […]
Read more

July 20, 2016
Alfredo Preciado
The Internet has gone absolutely crazy this morning with My Chemical Romance posting a cryptic message to fans on social media. The 35 second clip features what seems like a flag being waved with the piano intro of “Welcome To The Black Parade” playing in the background. Right before the clip ends, the date “9/23/16” […]
Read more

Echosmith to record with Gerard Way

March 7, 2016
Alfredo Preciado
According to a Twitter conversation, Echosmith will be entering the studio with Gerard Way. It is unclear whether Way will be working with the band for an album feature, or if Way will be producing. Check out the conversation below. @echosmith me too! — sleep lord (@gerardway) March 6, 2016
Read more

November 10, 2015
Alex Lizette
In a couple recent tweets, former My Chemical Romance vocalist Gerard Way has stated he will be heading back into the studio to finish recording both unreleased tracks “Don’t Try” and “Pinkish.”  He also mentioned the possibility of recording additional songs. Check out his tweets below. This week I get to finish Don't Try and […]
Read more