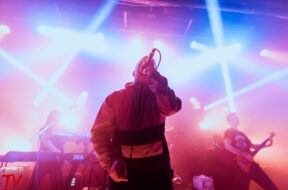 April 2, 2018
Luis Rosales
The Contortionists brought their tour over to Baltimore Soundstage as they brought along Silent Planet, Sky Harbor, and Strawberry Girls as part of their spring North America tour. Check out the gallery below as Luis Rosales was there for the show.   Strawberry Girls   Skyharbor   Silent Planet   The Contortionist
Read more

September 28, 2017
Luis Rosales
The 10 year anniversary tour of Between The Buried And Me‘s album Colors, hit Soundstage in Baltimore, MD last week as fans bought out the tickets for this sold event.  Joining them on the tour was support from The Contortionists, Polyphia, and Toothgrinder.  Check out the gallery below as our photographer Luis Rosales was there […]
Read more

July 27, 2016
Alfredo Preciado
Dance Gavin Dance have announced they will be releasing their 7th studio album, Mothership, on October 7th via Rise Records (pre-orders available here). Additionally, the band has also released more details on their upcoming Mothership headlining tour which will now feature The Contortionist, Hail The Sun, and Good Tiger as support (tickets available here) Check out the Mothership track list as […]
Read more

October 29, 2015
Alfredo Preciado
Sumerian Records band ERRA has announced they will be parting ways with vocalist Ian Eubanks after their upcoming tour supporting TesseracT and The Contortionist due to stress on his vocals from touring and recording. ERRA has also announced they already have recorded a new album with an unknown replacement vocalist. Vocalist Ian Eubanks will be taking a a […]
Read more