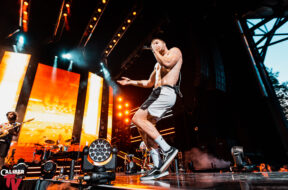 July 4, 2018
Luis Rosales
As part of the Evolve World Tour, Imagine Dragons make their way to the nearly sold out Jiffy Lube Live in Bristow, VA. Along for this leg of the tour is the young singing sensation Grace Vanderwaal. Check out the gallery below from Luis Rosales as he was able to capture some captive moments from […]
Read more

February 17, 2015
Michael Bird
Heading the trifecta of indie bands that broke big in 2013 (joined of course by Bastille and The 1975), it was Imagine Dragons who scored the wildest success of the bunch thanks to the clutch of anthems included on their grandiose debut ‘Night Visions’. Songs as immediate and enormous-sounding as “Radioactive” and “Demons” were never […]
Read more