Orphan? But really, who the fuck is orphan? This duo/collective is only just starting with this new EP they title Bread, but it’s already making some waves. Everyone talks about making waves, but in my opnion, it takes something very special to turn that talk into a reality. Time will tell if they do pop off, but I have only the highest hopes and respect for these guys hustle. In this one I’ll be doing a track-by-track sort of review since every track is relatively short and they all bring something different to this EP.

ORPHANS OF SALEM is essentially just an intro track. It starts off with some trippy feedback, with an underlying string section, and coming in with a Ren & Stimpy to tie it all together. When the beat fully enters we hear some screaming from an anonymous vocalist, and this happens to be when the beat really hits hard. Just as the track enters, it ends with a weird sort of outro that is again, a Ren & Stimpy sample. Cleverly executed and I love how it flows into the next song BREAD 2.

BREAD 2 is the first single/music video that Orphan released, just a week before they dropped the entire EP. The sampling reminds me of playing Donkey Kong Country on my Super Nintendo as a kid. Ayymry goes in hard during the first verse, delivering a flow that’s not seen all that much, from my perspective. The repetitive “Orphan?” lyric that permeates some parts of the track is also too damn catchy. Of the duo, their producer Son, takes the second verse of the track and delivers one of the best one-liners I’ve heard. It goes,

“Whole sheet to the dome rise up from the dead. They call me young Jesus Christ I’m serving up this bread.“

Overall, I love this track because while it’s fun and energetic, it also has some well-thought-out beats as well as lyricism. This track quickly segues into BREAD 3, which completely changes up the tone of the EP

I will commend Orphan for focusing on just hitting the listener with song after song, rather than including meaningless interludes that add nothing to the EP. BREAD 3 is heavily influenced with some more funky and old-school hip hop and Bay Area hyphy sounds. This track is one anyone could dance to, my favorite aspect being the off-beat and funky bass line that is persistent throughout the track. It’s only fitting that the track after this simply goes by the name HYPH.

I always love myself a nice simple piano intro(i.e Cell Therapy by Goodie MOB, Shimmy Shimmy Ya by ODB). Their producer Son layers on the original piano intro with an additional note, then quickly going into a more trap-based beat that has Ayymry going in hard with a crazy flow. The hook only truly comes in once when Son does a little line over the piano beat that goes persistently throughout the song. This track is one where Ayymry does get to really shine and spit some pretty memorable lines like, “Mouth full of pills, East bay trill”, that encompasses the one beat break during the song. HYPH will most certainly get YOU hyphy on this EP.

CREAM is a rather short track but it does contain another bass line that is sure to get stuck in your head. Ayymry is the sole vocalist on this track, bringing his classic flow to the track while also switching it up throughout. In the short 1:24, the duo bring an unrelenting and hard-hitting flow of both instrumentals and lyricism. This quickly transitions into the next track RAW TOAST(Feat. JOHNX) 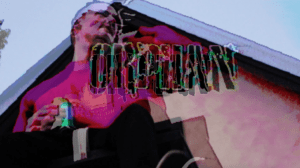 RAW TOAST is one of my favorites, honestly. The “Why you trippin on me?” hook that JOHNX iterates at the beginning of his verse is still stuck in my head. My only complaint is that I wish they would’ve added maybe one more verse from Ayymry to elaborate on the short-lived song. THIB is the next track and mainly focuses on the hook that is executed by their producer Son. I personally am not a huge fan of using auto-tune, but I gotta say, this was done in more of a subtle way and not impeding on the track. Smart move from the duo, as it does switch things up and keeps the listener on their toes.

FIB, the next track, is another classic Orphan track. It’s short and to the point and delivers a huge punch for how simple and to the point it is. If you’re not a fan of fast flows and beats that slap hard, you might not be into this. When Ayymry’s verse ends, there’s this subtle little pause. Its little things like that which add to an EP or album and I feel is lacking throughout a lot of music. This track ends with another exposed bass part, quickly going into the last track WID IT

WID IT relies on the main hook “Hop in the whip, hop wit id, I ain’t never seen no limit.  We ain’t neva been no gimmick. Ha Ha bitch I always been wid it.” That’s just a guess, honestly, but I feel like it could be correct. Overall I love how they end the song/EP with that hook just going on with only vocals and no beat. Probably one of the most notable sections of the EP.

I didn’t go into too much detail on this review as most of the songs are straight-forward, and don’t bullshit around. Overall a really solid intro for the band. As they progress my only hope is that they elaborate on their material and have one or two songs that touch the 3-minute mark potentially. Nonetheless, much admiration for this new group named Orphan, and I’m excited to see what they do from this point.