If you haven’t been lucky enough to witness this band live or hear their music, you are severely missing out. They blend their own unique sound of Venezuelan culture and music with the more abrasive sounds of metal. What they’ve accomplished in the past 11 years is phenomenal and admirable for any DIY band to take note of. The founding members, Dani and Juanchi, started the project in 2008 and have since taken it from their home country of Venezuela to now touring around America for the past 2 years nonstop in a van. They play about 205 shows a year. For many, that is the dream, yet that dream is under attack due to circumstances beyond the bands’ control. While all of the other members were able to get their resident petition’s approved, their vocalist/guitarist Dani was denied. Due to this, the future of Zeta appears to be at stake. 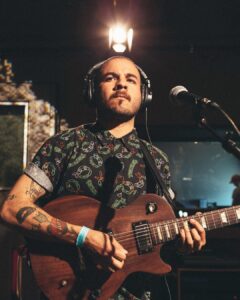 Having met and housed the band, I can personally attest that all of the members, including Dani, are some of the nicest and genuine people I have ever met. Dani plays an integral role in Zeta being recognized not only nationally but internationally. Without him, there would definitely be something missing from the group’s eclectic and diverse sound. As seen in both of the live videos I linked, the band members put their heart and soul into every performance and rely on that connection with each other to achieve this sort of synchronicity. It’s hard to not noticed Dani during live performances either. He’s jumping around, having the time of his life with his best friends. During random breaks from songs, they’ll talk about how appreciative they are of everyone who’s there, and even offer advice like “eat your veggies” or “stay hydrated.” While they’re small sentiments, they speak highly of the band’s integrity and compassion for the music community.

I was fortunate enough to talk with Dani about his history with the band and why his role in the band is so vital to their international acclaim.

Hi, I am Daniel, I am one of the founders and creators of the band Zeta. The other founder is Juanchi the Vocalist & guitar player. We created the band in Venezuela 16 years ago. Upon leaving Venezuela two years ago we traveled to the states to set our sights on new goals to tour the states. For this process to further our music careers into a new frontier we had to change our status in the states. So we certified to legally work in the USA as musicians. When we were approved we started playing nationwide with very extensive tours lasting several months at a time. Knowing we needed much more time to establish a growing fan base in the US we applied for residence Visa which took over a year. They asked for evidence so we gave them 15 years of our career experiences as musicians on paper. It was difficult, but we pulled it off translating over 500 pages of history and countless music creations. A few months later we received word… approved or declined. Juanchi was approved. Unfortunately I was declined. Based on the same evidence given. I appealed, and again the declined. They said that they recognize the band as national and international acclaim, but don’t understand why I play such an important role for the band as a guitar player.

Dani brings something to the table with his role as the guitar player/percussionist/backup vocals. He achieves an ethereal tone through his use of pedals in order to create sounds within heavier music that don’t often come up.  Without Dani, Zeta would not be what it is today, and most certainly would not be touring as extensively as they are present. Go check out the band, give them a listen, even if you don’t understand the lyrics. Music is something which can connect everyone together, no matter what language the vocals happen to be in. In writing this, I can only hope that someone takes account of what an essential role Dani plays in the bands mind-blowing sound.

Down below is an interview that both vocalists, Dani and Juanchi, did with hate5sixTV